Our marriage started on the rocks.

The rocks outside a Scottish lighthouse to be precise, immediately followed by Honeymoon I – a wet week on the Isle of Arran.

Honeymoon II was a marked contrast to Honeymoon I, although not in terms of the weather!

We waited a month or so to go to Costa Rica hoping to miss the rainy season.

There, we rode to the rainforest on a horse with no name and carried on up the canopy (150 feet up – on zip wires).

Volcan Arenal – one of the most active volcanoes in the world.

We danced on a live volcano, (it was lava-ly), rafted a river in flood (a 2h trip executed in 45 mins because the weather was MUCH wetter than Scotland!) and turned up at the poshest hotel in Costa Rica looking (and smelling) like the creatures from the black lagoon after an accidental sojourn in a mangrove swamp.

This was where we learned that it is prudent to learn a bit of the lingo before rushing headlong into DIY rental of banana cabins in remote and unspoiled places like Playa Zancudo in the far south of Costa Rica. It was true that the cabins were right on the beach, with a fine view of the rolling surf of the Golfo Dulce. No mention had been made, however, of the crocodile and bug-infested swamp to the rear of the beach. We found out too late that translated, Playa Zancudo, our handpicked honeymoon hideaway, means Mosquito Beach.

We arrived by boat and had to wade through the stinking swamp with our luggage, as the tide had deserted the pontoons which were cunningly fashioned from old railway sleepers. The taxi from this luxury marina to our door was a rusty wheelbarrow, in which our host wheeled our luggage. He quickly oriented us to our surroundings. “This is the road. It goes this way and that way” he told us. That was more helpful than you may think and saved us from getting lost. It was a dirt road and as such, quite difficult to distinguish from the surrounding jungle. He had also pointed out the healthcare facilities in Golfito on our way to the boat from the airport. “That’s the hospital. Don’t get sick.”

We arrived by boat and had to wade through the mosquito-infested swamp with our luggage. 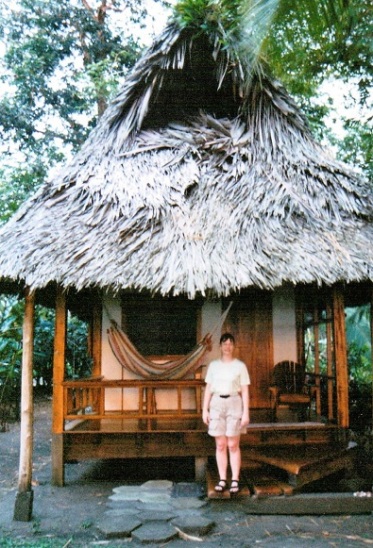 But we thought that the mahogany banana cabin with a view over the Golfo Dulce would be worth it.

We managed Zancudo for 3 out of the planned 4 nights. Then the nightlife just got too wild for us.

On the first night, we swatted the 80 or so mosquitos that were resident in our cabin and bent on making a feast of our sweet European blood. Mark weighs 100kg. He stood on the 4″ cockroach that looked like a Tonka Toy version of a VW Beetle. As you might expect when standing on a Tonka Toy, nothing happened. The cockroach sauntered off. We moved to a second cabin which had an ingenious mosquito deterrent fitted – a live bat. Unfortunately, we had to let him out. He didn’t seem to want any company and conveyed this to us by dive bombing our heads and circling at breakneck speed around the ceiling. 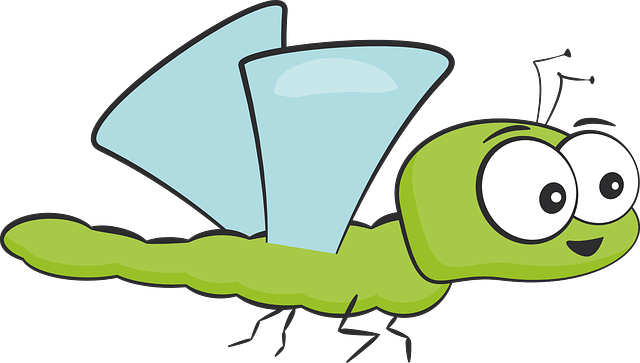 We classified the bugs by sound. ‘That was a B52!’

The nightlife got too wild for us.

We replaced the bat with a damp mosquito coil and resorted to skulking around in the hours of darkness, which was from about 5.30pm, illuminated moodily and romantically by my head torch with our hands over it. Any light at all attracted swarms of bugs, so we operated the torch strictly on a ‘need to see’ basis. Long, dark nights are not a problem on your honeymoon, of course and we kept ourselves occupied as you may expect; a favourite pastime was classifying the insect life by sound against the benchmark of the insect equivalent of a Vulcan bomber that had passed by our porch on the first afternoon. Happy debates ensued on the genealogy of Phylum ‘Arthropoda’, Class ‘Insecta’, along the lines of;

“Nah, more of a Eurofighter. Maybe with its afterburners on.”

Even using this amount of imagination, we didn’t get a Jaguar. They are sighted only rarely in Costa Rica.

After the 10 minutes or so which it took to light the damp mosquito coil with damp matches, Mark asked me if I wanted him to go and see to “those cockroaches” that I hadn’t noticed “on the other side of the room” before we went to bed. He managed to dispatch two but half of the third roach escaped and ran off to seek refuge behind the cooker, while the other half waved its legs defiantly at us from the sink. This was not ideal, but I felt able to cope.

We had by now got quite used to the relief map of the Himalaya which the sand flies had raised on our thighs. While not that attractive for your honeymoon, everyone knows that an increased surface area helps to keep you cool. This was a bonus when to avoid further bites, we went out in the steamy heat of the tropical night wearing long-sleeved shirts buttoned to the collar, sandals with socks and long trousers tucked into said socks. All topped off with a liberal spraying of the unisex designer perfume known as Jungle Strength DEET, the strongest insect repellant that money can buy.

You have to be a bit careful where you spray DEET as it has a tendency to melt quite a number of materials but, on the upside, it does smell better than some aftershaves and appears to make you exceedingly unattractive to the majority of bugs. I may try DEET the next time I go nightclubbing, even though in nightclubs, the laws of the jungle still apply. The ugliest ones are never deterred.

The turning point, really, was the snake. I quite like snakes. My parents despaired over the development of my femininity because I used to poke the eyes out of dolls but one of my favourite toys was a plastic cobra. I even let my brother knock out one of my milk teeth with the wing of a metal aeroplane because he promised to give me a rubber snake. (I never got the snake. During the ensuing autopsy of the incident with an angry parent, I knew better than to ask for mediation in the delivery of the prize.)

Mum and Dad should not have worried. Surely they should have known then that these were the signs that I would turn into a proper little charmer!

On my honeymoon, however, the only snake I really wanted to see a lot of was of the one-eyed trouser variety. Trouble is that in Costa Rica, of the 150 or so species of snake, 19 are poisonous. Deadly poisonous. And I don’t know which is which, because unlike the trouser snake, once you’ve seen one, you most definitely haven’t seen them all.

So, when I almost shook hands with a slender, rusty red six-footer, (which wasn’t my husband after a little sun) while pushing open the gate on the way to dinner one evening, I could only loosely classify it as a rattlesnake. The perfectly justifiable basis for my decision here is that it sure as hell rattled me!*

We left the beach paradise that is Zancudo rather hastily after an uncomfortable night during which we were too acutely aware of every bang and rustle, kept awake as we were by the heat and the fact that our bites had now started to itch. Badly. There was also the niggling knowledge that snakes like warm, dark places…

As part of the anti-insect campaign, we had busied ourselves with defences on the second afternoon. We had spent valuable honeymoon time caulking all the gaping holes in the walls, screens and floor with toilet tissue. This, we felt, was sufficient to prevent the entry of frail insectular visitors. We were not, however, confident that it would deter an enthusiastic serpent from joining us unexpectedly for a quick bite one evening.

Besides, the loo was outside and our faithful adherence to the lights-out bug-deterrent policy made it difficult to see where you were putting your feet and other, more, er, delicate parts when paying a nocturnal visit. I didn’t intend to re-start the rather chauvinistic but thankfully passé vogue for bum nipping by waving my pale and inviting bare behind temptingly over a Fer-de-Lance pit viper.

“What are you doing up so early, you’re on vacation?”

I think our hosts thought us a little lily-livered when we visited them at 6am the following morning, begging them to let us leave. After all, the snake had not actually been in our room. “You should have picked it up and taken it to the bar to scare everyone!” They suggested.

They were more sanguine about living with snakes than us. They told us that a boa constrictor had swallowed their prize Persian cat, right outside of their back door. Nothing they could do. They had only been able to identify her as a previous prizewinning Persian pussy by a rapidly disappearing pair of hind legs, at which point, it was a little late to intervene.

I imagined their shocked reaction to the tragic loss of a treasured pet. They had probably raised their eyes to the heavens like the parents of a mischievous child, before meeting each other’s gaze with a wry, goofy grin and that resigned, tutting “Snakes, huh?” kind of look. I wondered if they had reacted in the same way when “the crocs in the swamp ate all our ducks!”

We recovered from the trauma that was the beach holiday at the Vista del Vallé, just outside the Capital, San Jose. It was more of a short stay with good friends than a hotel and a veritable Garden of Eden. Here, even the bugs were irridescently pretty (and they didn’t bite!).

Frogs which looked as though they would turn into princes with a kiss watched with polished, haematite eyes from their lily pads while hawks soared on the thermals generated by the magnificent Vista which was laid out before our sun loungers. We overlooked the 500 foot deep Rio Grande river canyon, ruled by the stately and domineering figure of an ancient Ceibo tree. The tree itself had gazed from its vantage point high above the silver ribbon of water and silently absorbed the history and wisdom of the last five centuries.

We sipped orange juice and coffee from their own plantations, as beautiful coloured birds and butterflies flew around us and ridges of dusky mountains marched into the distance.

They say that ignorance is bliss. We proved it!

Zancudo showed our ignorance but now, this was bliss!

We rode to the rainforest on a horse with no name… 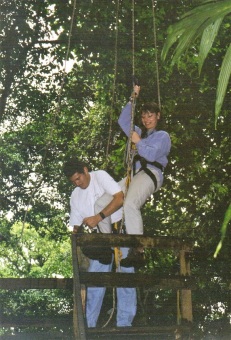 …and Carried On up the Canopy.

*The King Snake with which I had a close encounter is not venomous, but they do eat other venomous snakes. In case you wonder about poisonous snakes, here is a general rule of thumb with snake colours; Red touch Yellow – Kill a Fellow; Red touch Black – Good for Jack!

Snakes are generally shy creatures who will usually slither away before you even know they are there, however they will attack if you bother them. The Fer de Lance Pit Viper is an exception to this rule and is known to attack aggressively with little or no provocation.

5 thoughts on “Honeymoon II – The Sequel”