The sleepless nights were redundant. It could have been so different… but it was a no-tears exit from our pitch at Allevarde. No-one had parked next to us – so it was straight out over the two adjacent pitches and on our way!

We followed the glacial blue River Isère as we meandered down through the mountains. The steep-sided valleys widened, until they were able to cocoon Grenoble in a soaring, green amphitheatre, crowned with a halo of bright, white limestone.

We knew that we were in a city; pedestrians rushed along pavements, phones glued to their ears; impatient drivers cut in front of us or hooted impatiently when we didn’t move forward to block the intersections completely with our caravan, even though doing so would only add to the gridlock and chaos!

The last time I was in this area was over my 31st birthday – I came on The Ultimate Adrenalin Weekend. I did the highest bungee jump in Europe from Le Pont de Ponsonnas (103m); hit 100km/h and pulled 2G on the Olympic Bobsleigh Run at La Plagne, which I shot down in a racing bob with a professional driver and brake man (trying not to think about John Noakes overturning the bob on the Cresta Run); then a skidoo safari – swift and serpentine with bothersome bends (skidoos are not nimble at cornering and there were sheer drops to consider.) The Grand Finale was a Mountain Bike descent, which was probably the scariest experience of the lot. During the build up, the words “Last time I did this, I went over the handlebars 7 times!” were uttered.

Suffice to say that I had a Hurtling Happy Birthday, thankfully avoiding the Hurt! 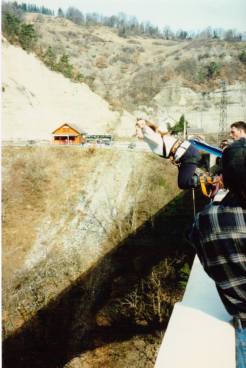 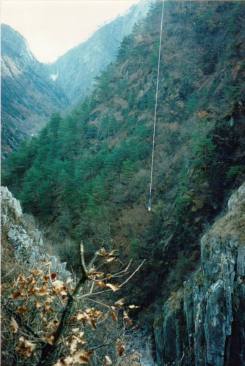 As the Isère flowed down to join the Rhône, we drove through the Vercors National Park past miles of gorgeous, regimented stands of shady, lollipop-shaped walnut trees. I was unaware, but the area has its own geographic Appellation for walnuts!

I took over at the wheel in St Romans, where we stopped for coffee and a cake at a lovely little drive-in boulangerie by the side of the road. We continued through St Nazaire en Royens, which had a stunning viaduct. The countryside felt alive – green and verdant, with everything growing fervently.

The approach to Marsanne wound around a small, bosomy hill. It seemed to find favour with flocks of aspiring Niki Laudas, who raced down the opposite way on narrow hairpins. I guess the sheer drops just added to the adrenaline! No stranger to adrenaline, I kept a cool head. We arrived safely and our self-imposed challenge was to get on to Pitch 30, at the very top of a steep hill. It had the best views!

The proprietress was not sure that we’d make it up the hill without a 4×4, but her hubby wasn’t on hand to advise and Mark had that look in his eyes. The climb up the 1:3 hill was fine; the final reverse; uphill on gravel into the pitch was a little more touch and go. There was a puff of smoke and a distinct smell of burning from Big Blue – “her engine’s working hard!” – but the only option was to line her up and put the pedal to the metal.

The required manoeuvre was a full-speed, dog-leg reverse avoiding trees and the electric hook up post. We are seriously worried about Big Blue’s clutch but as we’ve almost finished our mountain stint, we’re hoping that it will see us home!

“Into Marsanne and up to Mirmande.” The lady at reception directed me to find some nice dog walks. “Do you want me to write down the name ‘Mirmande’?” “It’s OK” I replied. “My husband knows it… He worked there 30 years ago picking cherries!”

So it’s been a trip down memory lane for both of us. It was always a long shot, but Mark was seeking the spot on the Rhône where he, Greg and Jackie*, his travelling companions, took a photo of themselves taking a bath in the river. They were travelling in an old Ford Transit van (not even a converted Transit van!) which had rather fewer facilities than our caravan. There is also a quarry to track down, which is where they camped!

*I think it is worth sharing here that Mark ran into Jackie, his erstwhile travelling companion on a visit home. Although we had not met, I immediately knew that it was Jackie. Which was lucky, since Mark had his arms folded uncomfortably across his chest and didn’t introduce us.

“I had one of those ‘tumbleweed moments'” he explained later. “My mind went completely blank and I couldn’t remember her name…” I almost collapsed with laughter. I could understand it if she was called Aoibheann or something, but you think ‘Jackie’ would be memorable. Especially since it is exactly the same name as his wife!

Our campsite, Les Bastets is lovely, on the side of a hill with far-reaching views across the plain to the mountains. There are black and white moths everywhere; French moths always makes me think of Inspector Clouseau – he would definitely pronounce it “Merths”.

Apparently, it is just “that time of year”. The lady at reception said “they are not very interesting”, but I think they are really pretty, all fluttering around like vast flurries of autumn leaves. I might change my mind when we’re trying to sleep in a caravan that resembles the butterfly house at Syon Park, however!

They say that insect protein is the future for feeding the world. Many moths seemed to perish in the dogs’ water bowl, but this wasn’t a problem. Rosie found them delicious and hoovered up the lot!

It was s’posed to be 26C again today. It had been cloudy as we left the mountains near Allevarde but we are back to cloudless, bluebird skies here in the Drôme. The outlook has become a bit more Mediterranean. We have left behind the lush, green hills and distinctive Alpine chalets and are now in slightly more parched, stone villa and cyprus territory. It looks a bit like Tuscany.

We are not using tollways and with the van windows open, the scent of pine and sage drifted in. There is no livestock here, it is very much a growers’ paradise; melons, peaches and apricots, plus fields of maize and sunflowers, which are now fading and bowing their heads, as if ashamed of their lost beauty.

Luckily, there is a stiff breeze on the top of our hill, or it would be sweltering! Following a quick and unsuccessful quarry-search around Mirmande, we took the doggies for a walk on the top of the Col which divides the valleys. Although it was 8pm, the temperature was still 28C! We have no direct shade on our hill. It’s going to be a hot couple of days!

As night fell, it all became very Alfred Hitchcock. Swarms of moths were drubbing on the outside of the caravan; it sounded like a hailstorm! It was the second sinister sound of the day – the blades of the distant windmills on the Col sounded like the beating wings of the Nazgul in the Lord of the Rings films!

We had to shut the caravan windows from the outside, keeping the insect nets closed to stop the moths from flocking into our living space. When Mark opened the door to take the dogs out, clouds of moths wafted in! It reminded me of our honeymoon; once again, we spent the evening trying to eliminate a plague of insects from our accommodation – although Mosquito Beach (you can read all about THAT in Honeymoon II – The Sequel) was considerably more terrifying and uncomfortable than Moth Mount! We went to sleep to the deafening song not just of crickets, but of stridently stridulating cicadas!

We woke to another day of 30-degree heat; too hot to do anything until later in the evening. We had planned to go to Mirmande but ran out of time! So easy when you do nothing all day… We re-visited the top of the Col and walked the opposite way in the delicious shade of the forest. We got up close and personal with the windmills. In the right setting, I rather like them. Here, the 3 or 4  of them looked like an art installation, although I can’t say I am keen on the idea of Navitus Bay – hundreds of the things spoiling the Jurassic Coast and our special south coast view from Bournemouth to the Isle of Wight!

I asked the lady in reception where would be nice to get down to the River Rhône for the dogs to swim. She said she was new to the area and didn’t know. I told her I would report back. We went to the Rhône and found nothing but factories and a large cooling tower! I reported back that it was ‘Horrible!’ and she expressed no surprise. “The Rhône is well known for its Nuclear Industry,” she said. Why, thank you for letting us know!

We did, however, go up the River Drôme valley past Crest, which has one of the tallest castle keeps in France; 52 metres  high and dating from the 12th Century. We ended up in Aouste sur Sye, a beautiful, little town, where we had a welcome cool down and walk along the river.

Then, finally, 3rd day lucky, we actually ventured into Mirmande! The tourist office was just shutting (it was 6pm!) but we found a lovely café and since time had marched on, instead of having a coffee, we treated ourselves to a cold one! I nearly got mine for free, but unfortunately, we are too honest and told the waitress that she had missed it off the bill.

The Drôme is famous for its medieval hill villages; sentries from distant and more troubled times when a clear lookout was essential to survival. The golden stone houses of Mirmande seem to rush up the hill, with just a few buildings having the momentum to reach the summit, which is crowned with a castle keep and Cyprus trees.

First mentioned in 1187, Mirmande has risen like a stone phoenix from the rubble a number of times; incongruously, in the 19th century as a silk town, when 3000 people made their living spinning and working with silk. The village was gradually abandoned as the industry declined and the town fell into ruin. Then in 1926, the cubist painter and writer André Lhote founded a painting academy and many artists took up residence and joined in the renovation.

Today, the site is listed as a Historical Monument and, like Sixt-Fer-à-Cheval, is one of “the Most Beautiful Villages in France”.

I can’t say that I disagree!

As we continue our journey, can Mark manage to remember my name? How will we cope with a spectacular reverse-by-committee? Why does caravanning require you to swing both ways? And discover whether or not we’re Happy with our Lot!

3 thoughts on “A Trip Down Memory Lane”