Gorgeous Gorges, The Marmite Mystification, plus Zen and the Art of Caravan Conservation

After our 6 hour and 1,474m epic up Marvel in Morillon on Monday, we felt beautifully beaten up – tired, but happy and in need of a good stretch…!

Since it was another dazzling day of full sun, we made plans. I said that I was quite happy to continue with my plan of lying down and admiring the mountains (we can see peaks through all the windows AND through the roof lights!) Mark then planned to make a coffee. We had planned on doing some jobs today; laundry and caravan maintenance but we soon got that off our ‘To Do’ list. We can reveal to you a totally failsafe way of tackling an over-long ‘To Do’ list. Simply don’t do any of it. Or even better, just cross everything off – then you don’t even have to feel guilty!

It was very mindful – it is so nice to get away from the constant ‘doing’ and just concentrate on ‘being’, although it did mean that we didn’t get out until about 2pm!

We had lunch at the Gorges des Tines. It cost €10 for 1 burger and 1 sandwich jambon-fromage. We had both wanted a burger, but the café had run out of burger buns! On a small scale, this demonstrates some of what is wrong with the French economy. We have discovered why all the towns that we have visited are so quiet. It is the peak holiday season, so everyone has closed up their business and gone away on holiday! If you are one of the cunning few who stay at home to make the most of the holiday bonanza, why would you bother to stock up on easy-to-store burger buns?! 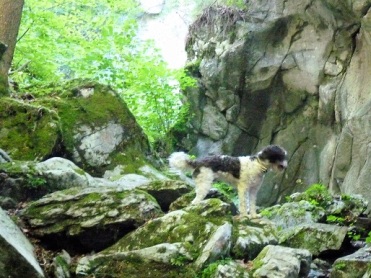 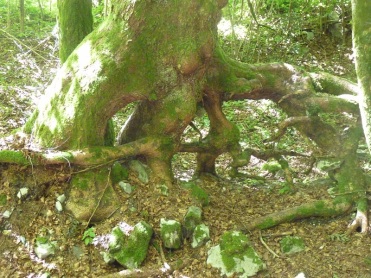 ‘Tines’ means ‘cavity’ or ‘pot’. Satisfyingly, the French word for this is “Marmite”! The mystical clefts in the rock provide a landscape that is very different from anywhere else. It is spectacular; damp, mossy, gloomy and green with needles of sunlight lancing down to reach some places for literally just a few minutes each day.

But Marmite is ever controversial and here, a geological ‘yes or no’ rages around this particular Marmite. How were the four roughly parallel fissures formed? There is a theory that they are simply the river beds of the Giffre as she changed course; this could account for one or maybe two but probably not four Tines, so another theory postulates that they could originate from the torrents of meltwater from the glaciers when the ice-age ended. Love it or hate it, even the theory of Marmite has a 50:50 split!

We had intended to walk from the Tines to the Cascade de Rouget but in keeping with today’s theme of abandoned plans, there was a fallen tree blocking the route just before a ladder ascent. Mark went to check it out for dog-accessibility (the dogs had already ascended two ladders successfully!) As I waited with the pooches, a group of walkers came past sporting poles, boots and proper rucksacks, in stark contrast to my sandals and shorts, upon which they commented in French. And which I understood!

I told them that they could get to the ladder past the fallen tree. Despite their professional equipment, they did not believe me. The mad Englishwoman in sandals proved to them that it was, however, feasible. The dogs suddenly decided that they were missing their Dad. I followed them over and up like a rat up a drainpipe, sandoodles an’ all, because Lani had started to climb the ladder to go after Mark. Unfortunately, she lost faith halfway up, so I had to rescue her. We decided to leave the Cascade de Rouget for another day and another route!

This ladder episode reminded me of the charade that happened yesterday at the car park in Les Esserts. There was a long, mesh staircase, up which we had to carry all the pups to the start of the walk. None of the dogs are keen on mesh bridges or steps. On the way back from our walk, I took a detour via The Sherpa supermarket to score a couple of well-earned beers, while Mark navigated the staircase with the dogs on his own. Clearly, he couldn’t carry them all at once, so he did it in stages. He relocated Kai to the bottom and told him to wait.

Like the Grand Old Duke of York; Lani didn’t like it when she found herself neither up nor down!

It then became like one of those mathematical puzzles; Mark carried Lani down and told her to wait, but as he went up for Rosie, Lani climbed back up again. She hates stairs but just loves Mark so much! This continued in a pure farce like the Grand Old Duke of York, with Mark and dogs marching up, halfway up and down again – but never in synch. Eventually, Mark did get everybody down at the same time and returned to the van – at which point Lani took off to go and find me!

However, like a Dalek, she reached the bottom of the staircase again and suddenly decided that the steps represented the end of her plan to conquer the Universe. She abandoned her heroics and simply ran back to hop obediently into the van!

As we returned to the campsite through the village of Sixt, we were shocked to see military vehicles and Nazis everywhere! Where are we? What year is it? Who’s the President? Had we experienced a timeslip in the Tines? It seems they were filming something or other, but it was all a bit ‘Allo ‘Allo!

I had purchased a bottle of Cotes du Bergerac at the great expense of €4.60. It claimed that ‘it wins many medals.’ It was so revolting that even our resident lush Rosie turned her nose up at the vintage! Mark tried one glass and decided to go and wash the roof of the caravan in disgust. The sticky stuff he had discovered all over the caravan roof in Challes les Eaux seems to have solidified into a compound more inert and resistant than diamond, although my Magic Eraser seems to be making some headway on the worst bits. The wine could help to soften it, but it is so acidic that I would worry that it might dissolve our AluTec body shell!

Our French and Dutch neighbours watched intently as Mark gained elevation by standing on the back of the van and I could hear the Dutch chortling away. It seems that a man washing a caravan roof passes for entertainment in the mountains. I will say that it is certainly the most picturesque vehicle wash ever!

I did Mark a favour by drinking the horrible wine. I didn’t want to subject him to any further pain, since while washing the caravan, he managed to slice his finger, stub his toe and spill dog food all over the floor (he was standing on the dog food box to reach through the small middle skylight – in which he also nearly wedged himself…!) With it occupying an unexpected location, I also managed to stub my toe twice on the dog food box and our bed is now wet where Mark passed a bowl of water up onto the roof. It did nearly stay there, but gravity is a powerful force which unlike atmospheric pressure, does not diminish at altitude…

Well, we were warned that this campsite was subject to flash floods…

The link above will connect you with my 30s Site Review and Things to Do in Sixt Fer-a-Cheval. If you would like to read about dog-friendly off-lead walks in the Natural Park and our other adventures in Sixt, click on the links below;