In St Lucia on my 40th birthday, a local told us, “I wish I had a French passport, like they do on some other Caribbean islands, then I would be able to travel freely, wherever I want.”

Effectively, he couldn’t leave the island. To travel almost anywhere in the world, he needed a visa, which he could only obtain from Barbados. St Lucia is poor. With 30% unemployment, the likelihood of most St Lucians being able to afford to travel to Barbados to get a visa was close to zero. The man did not have Freedom of Movement; his options were limited. He could not choose where to go to live and work nor could he go elsewhere for a holiday, to study or to better himself. He lived in what we would call paradise, but we had choices. For him, it might as well have been a prison.

I remember feeling humbled. By an accident of birth, I held a British passport; one of the most powerful passports in the world. I realised that I took my freedom to travel so much for granted that until then, I had never even given it a thought.

On the morning of Friday 13th December 2019, we awoke with the same sinking feeling as we did on June 24th 2016, the day that Britain voted to leave the E.U.

On Friday 13th, Boris Johnson swept into Downing Street with a decisive majority, giving free rein to him and the E.R.G., the extreme right wing faction behind Brexit, who have been pulling the strings in the Conservative party. Despite Pro-Remain and Pro-Second Referendum parties getting more votes than Johnson’s Conservatives in the General Election, Britain’s first-past-the-post system crushed all hope of the electorate being given a chance to reconsider the important facts that have come to light since 2016, along with any likelihood of a soft Brexit.

I am not 100% a fan of the E.U.; like any large organisation, it has its faults. However, no-one can deny that it has presided over an unprecedented period of peace and prosperity in a previously war-torn region of the world. I grew up in the 1970s, before Britain joined the E.E.C. as it was then. Those were ‘The Good Old Days’ – when the U.K. was justly known as ‘the poor man of Europe’, with its soaring inflation, record unemployment, power cuts, shortages and strikes. The U.K. joined the E.E.C. for fear of political and economic isolation in Western Europe. Unfortunately, I can’t see what has changed.

The British tabloid press has pursued a campaign of misinformation against the E.U. for decades. I respect that others have different opinions. However, despite its shortcomings, I believe that the UK’s fortunes would be better served as part of a larger entity in a world where China, Iran and Russia recently collaborated on military exercises and the U.S.A. is governed by Trump. Britain is physically part of Europe. Brexit will weaken Europe, and this inevitably poses a risk to the U.K. in these dangerous and uncertain times.

On 31st January 2020, I wept for Britain. The U.K. left the E.U. and entered a Transition Period, which is due to end on December 31st 2020, whether or not a deal has been struck. Johnson is adamant that there will be no extension.

It seems highly unlikely that a meaningful deal can be negotiated in a matter of months. Insisting upon such a short and arbitrary timescale suggests to me that this is the plan.

Johnson illegally closed down Parliament in an attempt to prevent elected representatives from blocking a No Deal Brexit, which the Government’s own documents suggested would be catastrophic. The blatant lies and financial impropriety of the ‘Vote Leave’ campaign have been reported; the large, personal financial gains to be made by prominent ‘Vote Leave’ campaigners are known; Brexiteers who offshore their assets to avoid tax will avoid scrutiny by forthcoming E.U. legislation; prior to the election, Johnson sacked every moderate in his party who opposed him; the report on Russian interference in the referendum remains suppressed along with the investigation into Johnson’s misuse of public funds. In global democracy indices, I am sad to see that Britain, once named ‘The Mother of All Parliaments” is now classified as a ‘flawed democracy‘.

So, although ‘Leave’ won by just over half in 2016, if indeed they did win at all, the likely outcome for the other nearly half looks like being the hardest and most damaging Brexit possible, putting the economy, jobs, the U.K.’s Union, peace in Northern Ireland, food safety, the environment, workers’ rights, the N.H.S., the value of Sterling and national security at risk. (See The Implications of Brexit a report by British international asset management company Schroders plc.)

The Henley Passport Index shows that since 2015, the British passport has slid from the Number One spot to number eight. Currently, Brits can travel visa-free or visa-on-entry to 184 of the 195 countries in the world. But that is about to change.

Loss of Freedom of Movement for British nationals in the E.U. because of Brexit looks inevitable. After the Transition Period, we will be able to spend only 90 days in every rolling 180 day period in the whole of the Schengen area; currently 26 countries but growing, with the likes of Romania and Bulgaria committed to join. If Mark and I spend half of another winter ski season in Italy, we won’t even be able to drive through Europe to go elsewhere. So we have been seeking a solution.

“I’ve had enough of Britain. Let’s go to Mongolia,” I said to Mark.

I was only half joking.

This is one of the reasons that I have been so quiet lately. Mongolia is a country three times the size of France with only three paved roads. Although Big Blue and Kismet have been reliable and well-behaved in conducting us across the Carpathian Mountains and the odd cornfield in Romania, traversing the Gobi desert could be a step too far.

So meet The Beast. She is a Volvo N10 6 x 4 truck, apparently capable of being driven on the moon. She has spent her working life since the early 1990s in the Belgian army; we bought her from a dealer in Holland and Mark will shortly be driving her back to the U.K. on Austrian plates. There, she will be converted into our new home.

We have had a few hurdles to jump through; we let Mark’s L.G.V licence lapse last September because, “You’re not likely to need that again!”

Thankfully, since we are in Italy and the U.K. is in the Transition Period, during which our relationship with the E.U. has not changed, Mark was able to get his lorry licence renewed without having to return to Britain. And we won’t have to pay two lots of V.A.T when we import The Beast.

From 1st January 2021, importing anything from the E.U. will be significantly less straightforward.

John Steinbeck was starkly prophetic when he said that if he wanted to destroy a nation, he would give it too much, and would quickly have it on its knees; miserable, greedy and sick.

There will be no-one happier than me if Brexit goes well, but however hard I look at the facts, I fail to see how it will work. I voted ‘Remain’ for much more than the impact that it will have on our lifestyle. Until Brexit revealed the true colours of too many of my countrymen, I was proud to be British. Now I am ashamed.

Unfortunately, as U.K. citizens, I can’t help thinking that we have taken democracy and our incredible rights and privileges so much for granted that we have simply given them away freely. 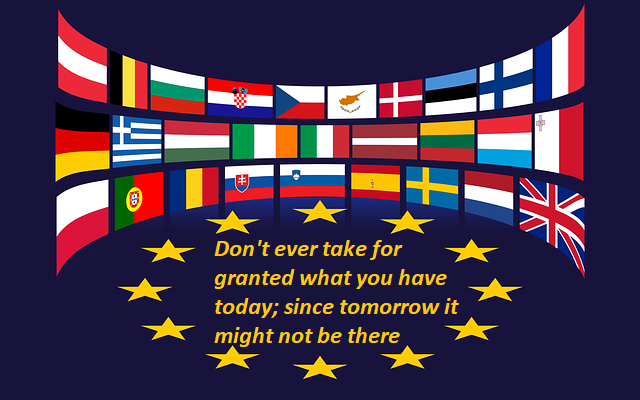 The other reason I have been so quiet lately is because I have been finishing off my new book.

Pups on Piste – A Ski Season in Italy is now available on Amazon. See my Books section for more details, although do feel free to click through and buy it straight away!

19 thoughts on “Our Brexit Busting Plan”