We thought we were going to die last night.

We shot out of bed at 4am when there was a HUGE crash. There was a heavily-leaning tree above the caravan. We both thought that it had come down on us! It was just a massive thunderclap. However, more thunderstorms were forecast.

The pitch next door was now free and had no potentially unsafe trees on it. We decided to move!

Although it was one of our shortest journeys ever, getting off such a problematic pitch was just as difficult as getting on! It involved a lot of hitching, unhitching, pushing and twisting. I think that Michael, the German bloke with the caravan next to our entrance, was more than a little worried!

We still had a view of the sea and deduced that only a nutter would try to get on the pitch that we had vacated… In any case, we ‘claimed’ our previous pitch as a dog run, with cunning Cavapoo Containment fashioned from two bikes, the van, two paddle boards, plastic boxes and a washing line with blankets over it.

Then to the other issue – the danger of just skinny, without the dipping.

Being both out of clothes made it laundry day. It could have gone better. Mark ran off a full forty litres of precious hot water because he forgot that he had left on the tap with the washing machine set to drain!

We had chosen our pitch carefully; with views out on two sides. This also meant that all passers-by had views IN on two sides. While yesterday, Caravan Kismet seemed to be the star of the show, with many an admiring glance. One German chap even threw us a “Nice Van!” as he walked by. Today, our smalls were the star attraction.

“It reminds me of Ely!” said Mark. “Maybe we should invest in some joke underwear.” Mark was harking back to a day trip where, on leaving Ely’s car park to walk to the cathedral, which was built by Benedictine Monks whose only concern was to glorify God, all comers were forced to pass a washing line displaying a row of knickers of the most majestic immensity, whose only concern was surely to glorify a backside the size of Cambridgeshire.

There was a field just outside the campsite where we had been told that we could run the dogs. There were people camping there today, so we continued on the coastal path past the dog beach. Like all roads in Croatia, it ended up at a naturist campsite!

Mark groaned when I suggested that if we went out for a walk to look at the night sky, it would be a Star Trek.

My first pun at Punat.

It could only get worse!

We had a lovely walk from the campsite into the town of Punat along the quay. We ambled through the shady, narrow streets of the old town. It was very cute! I bought a postcard of the Krk bridge for my Dad. As well as puns and mountains, he loves bridges and had passed this one on a tour when it had just been built in 1980. Then, it was named after President Tito. Since Tito was deposed, it is now simply called ‘Most Krk’ or ‘Krk Bridge.’

Most Krk is a two-span reinforced concrete bridge, which crosses the island of St Marko. The longer span is the second longest concrete arch in the world – and among the longest arches of any construction! It’s a shame that Tito’s first name was Josep. A double bridge just lends itself to being christened Jeff Bridges.

Didn’t like my bridge pun? You’ll get over it.

If you did, then as the bridge said to its arches, I am grateful for your support.

To Vrh or not to Vrh? That is the question.

Vrh is the high point on the island – and also appealed to me due to its lack of vowels. We spent an hour in the town of Krk, which is a gorgeous, medieval city. Well worth a potter on the narrow, winding streets. It was very hot, so we got a few looks when we immersed the dogs in the sea on the only bit of beach there was. It was s’posed to be dog free, but we had hot dogs. It was an emergency!

A lady called Jocelyn, whose bicycle tyres we had pumped up, told us that she had been to Baska. She said that it was beautiful to look at, but they had made it into Tourist Hell. “You could not get another person on the beach! It was ‘ice cream, ice cream, ice cream’ one after the other. But the nature is beautiful.” We decided not to Vrh but to take a chance on the nature. We got more than we bargained for! We were a little unsure of the way on our beautiful walk around the coastline – but we were given directions by a man wearing nothing but a camera and a pair of sandals. Our route back, a Public Footpath I’ll have you know, took us straight along a naturist beach and right through a naturist camp!

Naturism is BIG in Croatia – in both popularity and dimensions. The majority seem to be German and let’s just say – you don’t find many slim naturists!

Here is a series of photographs, taken just a few minutes apart, which sum up the life of a windsurfer.

“GET RIGGED UP!” At last. The end of the 3 month wind drought! “I’ll go out and tell you what it’s like then we’ll get you rigged and out.” We were so excited!

THEN – the rain came and killed the wind. Completely! On the up side, at least the kit got wet! 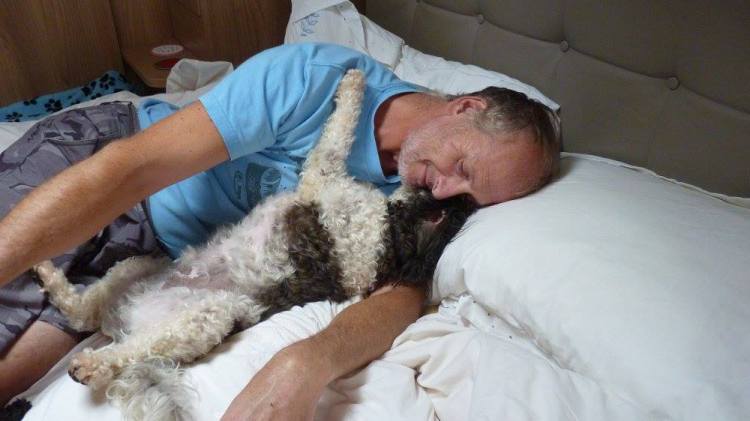 Kai gives Mark a comforting hug to compensate for the disappointment.

Sometimes the disappointment is so severe that it is a 2 hugger!

And that was our day!

The doggies didn’t want me to feel left out. They all had been out in the rain, so were lovely and soggy. Mark’s kit was wet – and so was I. It felt almost exactly like I had actually been windsurfing!

The forecast was terrible and everything was closing up for the season. We had planned to go via Lipica in Slovenia to visit the famous stud, which breeds the beautiful, white Lipizzaner dressage horses for the Spanish Riding School in Vienna. Even though dogs are allowed on the tour, the forecast for Lipica is 90% rain and thunderstorms. The dogs are terrified of thunder; we doubted that worried woofs and white horses would be a whinnying combination.

So we decided on a course of action based on departing from a piece of graffiti where a Corvid had dined.

I hope you enjoyed my terrible puns at Punat!

My Dad was not entirely innocent. He told me the Serbo Croat word for market. He was making a Trg point.

The pumpkin photo at the top was taken at the delightfully quirky pub The Square and Compass at Worth Matravers, Dorset, UK.

I am sorry about the bad puns. It’s just how eye roll.

By way of explanation, the collective noun for crows is ‘a murder’. ‘Trg’ is the Serbo Croat word for ‘Market’ and a Trig Point is a fixed triangulation point, used in surveying projects.

This time it really is Krk Out. Join us next time for some sun and wind as we move to Lake Garda in Italy!

One thought on “Can You Perfect a Pun at Punat? Island of Krk, Croatia”