Mark made a sly, nocturnal foray on to the roof of the caravan with a set of clippers.

The following day, we found a note on the caravan requesting our presence at the Campsite Reception. With our history of evictions, we were more than a little worried.

That morning, perplexed neighbours had wondered aloud why we were sneaking around the campsite carrying boxes of olive clippings.

The reason was that our pitch was so tight that the olive tree was rubbing against the caravan. The delightful ‘ponk’ of olives bouncing off our roof, night and day was comical and exotic. The branches, however, contributed an unrelenting soundtrack in the range of frequencies that set your teeth right on edge; along the lines of fingernails on a blackboard or polystyrene rubbing on glass. So, as covertly as possible, Mark had taken matters into his own clippers.

Thankfully, our summons to Reception was to do with a delivery of dog food. 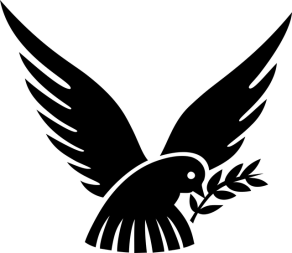 We were relieved, since we suspected that we had discovered the one, unique scenario where offering an olive branch as a gesture of peace would not have calmed the waters!

Olive-tree-gate over, we still departed from Garda like crooks on the run. En route, we accrued an an unpaid motorway toll ticket and struggled to pay for petrol at Pont St Martin. We seemed to have a credit card crisis. None of our plastic fantastic would work.

The drive up the Lys valley with the autumn colours developing was beautiful. It feels like our own. This is where we come to ski for the winter season. We had never driven up this road without passing through a cathedral of icicles along the way!

Our campsite, Margherita, in Gressoney St Jean was basic but sweet. We set up the caravan to the background melody of cow bells, which sounded like a free-form hand bell recital. The views up the valley to the Monte Rosa glaciers were stunning.

But our ongoing caravan maintenance problems called for higher levels of Zen. Following our service, we found that our dealer had cross-threaded the cap on our Alde heating tank. The Alde tank is in Mark’s wardrobe. The problem had come to light at the start of our trip because green ectoplasm had spewed out of the tank over ALL of Mark’s clothes. In the heat of a Continental summer, however, we had soon forgotten that as a result, the level of the heating fluid was below the minimum.

Now it was October – and we were camped at 1385m; over 4,500 ft. That’s just a little higher than the summit of Britain’s tallest mountain, Ben Nevis! The mountain weather was lovely during the day, but turned very cold overnight.

I heard the heating pump click into action during our first night and leapt up to switch it off. Never one to overreact, I was afraid that with insufficient fluid in the tank, it would blow up.

It was bloody freezing in the caravan – even the dogs were cold and wanted to snuggle under the duvet. We welcomed them in; dogs’ body temperature is a toasty 102.5°F compared to humans’ measly 97.6-99.6°F. Four fur-covered hot water bottles were very welcome!

It was not enough, though. In the wee small hours, we switched on a couple of rings on the stove; one electric, one gas. I didn’t want to leave them on all night; in my calm and reasoned way, I was sure that this would blow us up instead – if we hadn’t already been suffocated silently in our sleep by Carbon Monoxide.

The blasts of heat generated by short bursts from the hob were short-lived and soon dissipated through the walls of our tin box. All in all, it made for a very uncomfortable night!

In the morning, as we watched farmers on ponies bringing the sheep down from the hills, I had a mission of my own. To find out what fluid was needed to top up our Alde heating tank – and where to obtain it in a remote mountain village when online ordering is out of the question because none of your credit cards are working!

Thirty years in the corporate world has honed my problem-solving skills, however. When facing insurmountable problems, I always find it helpful to ask; “What would the Lone Ranger do?”

We eventually got through to the dealer and were told that we could leave it as it was, since it was an expansion tank. The fluid needs room to expand as it heats up and the level was not too catastrophically low. Mark’s clothes, it seemed, had not absorbed a disastrous excess of heating fluid.

The dealer assured us that the Alde central heating was independent of the hot water system, so a whole summer of heating up water would not have damaged the boiler. We asked the dealer to make a note of their advice alongside the complaint that we had lodged after the service and, we suspected, with their other note that we are ‘difficult customers’ because of all the complaints that we have had to make about things that are not our fault!

With the heating sorted, we had some other important business to attend to. Not the laundry, although that was, as usual, overdue, but buying our seasonal ski passes! Unlike last year, we now knew that buying them before November would earn us €200 without even passing ‘Go’. Buying before November yields €100 discount each!

There was also the other unfinished business; Alpenzu.

This was the walk that we had tried to do in the winter but had been thwarted; the sight of a chap coming down in crampons had rattled us a bit – just before we discovered for ourselves that there was no way that we would make it up the icy slope in hiking boots – never mind back down again!

It is a steep, strenuous but shady climb to one of the oldest Walser settements. The local Walser people are a German-speaking community who originated in the Swiss Valais.

The village of Alpenzu was first recorded in 1200, although the thirteen traditional wood and stone dwellings that make up the village of today date back to 1668. Sitting on a natural rock balcony, the village rewards those who make the climb with beautiful views of the Monte Rosa massif and the valley below.

Although it was closed now, throughout the summer, the mountain refuge is open, offering drinks, food and accommodation.

Of course we did the walk in our sandals, but should really have been wearing boots!

On the drive back from our walk to Alpenzu, Big Blue became submerged in a sea of sheep!

These were lop-eared Bergamasca alpine sheep. It was wonderful to see all our little ovine companions being driven along the road, headed by two donkeys and accompanied by a couple of gnarly mountain farmers. A sight probably unchanged in these valleys for generations.

We retraced our steps on a couple of our stalwart winter walks. We followed footpath 7 from Staffal up to the hamlet of Cortalys, where we actually met the summer resident of our favourite house up there! He told us that footpath 7 was dangerous in the winter, because of avalanches, so this winter, maybe we won’t walk there quite so often… (This proved to be good advice. Footpath 7 was actually blocked for the whole of the following winter due to an avalanche so massive that it contained hundreds of fully-grown trees!)

The dogs got a bit spooked while we were walking. The silence was punctuated by some deep, mysterious booming sounds. We couldn’t see anything, but it was probably avalanches or cracking in the glaciers on the Monte Rosa Massif. It was a really enjoyable walk, with all the larches changing colour around us. We have spent so much time here that it really does feel like home. We love it!

Another of our favourite walks is the Passegiata della Regina – The Queen’s Walk. The Passegiata wanders along the side of the valley and was used by Queen Margherita of Savoy to promenade to the village from her summer residence, the fairytale Castle Savoia in Gressoney St Jean.

Our time passed pleasantly until we woke one morning to see Monte Rosa looking distinctly rosy. The weather was beginning to change. Even in the daytime, temperatures had begun to cool.

Snow was forecast for Monday, so it was time to be a’ comin’ down the mountain. Adventure Caravanners we may be, but we figured that icy hairpins while towing were best avoided!

It had been great to do our favourite winter walks in sandals.

Next time would be in the snow!

The answer to the credit card crisis was that Barclaycard decided to cease its partnership with American Express. On doing this, Barclaycard cancelled all of our cards – both of our Barclaycards and both of our Amex credit cards – and re-issued us a new Barclaycard each. We had no warning. Our cards were well within their expiry dates. They were simply stopped and new cards sent in the post, along with an explanation.

Of course, our new cards and the explanation were on a doormat in the UK while we were in Italy with no credit cards! Thankfully, we had a pre-paid Euro currency card which we could top up online and use to withdraw cash and pay at petrol stations. It didn’t work in toll booths on the autoroutes, however.

Unexpected fall-out of using the pre-paid card was that our shopping bills didn’t seem to add up. We discovered that this was because in a bid to be helpful, the lovely couple in the local supermarket were converting our bills from Euros to Pounds Sterling when we used the card. We didn’t notice until we spotted that on all of our shopping, we were being charged a currency conversion commission for Pounds to Euros and back to Pounds again!

Join us next time as we experience Riots at Calais and Torrents on The Thames on The Long Drive Back to Long Pants!

2 thoughts on “Zen and the Art of Caravan Maintenance – From Garda to Gressoney, Italy”