Sometimes, a place you visit really gets into your heart. That happened to me in Hawai’i. There, they call it ‘aloha’.

You might be familiar with aloha as a greeting. A way to say ‘hello’ and ‘goodbye’, but it is much more than that. To the Polynesians, aloha is a state of being. One that encompasses great love, respect for all things around you, and an intimate connection with your history and lineage. The word’s constituent parts reveal the complexity of its meaning. ‘Alo‘ expresses ‘sharing’ and ‘ha‘ ‘the breath of life’, while ‘oha‘ also means ‘showing friendship or affection’.

This ‘Aloha Spirit’ – a philosophy of kindness, compassion, and sharing – is so integral to the Hawai’ian way of life that, informally, ‘The Aloha State’ accepts it as law.

I experienced aloha on Maui. I fell deeply in love with more than just the location. I felt a profound connection with the beauty of the land and its people. Departing felt like leaving behind a beloved in the heady throes of a new relationship. But aloha also seeped into my being in Matera – one of the oldest continuously inhabited cities in the world. Only Aleppo and Jericho are older.

As we would discover, Matera has an atmosphere. A lingering sense of passing centuries. Humans first colonised the area in pre-history. They left stone tools that have been dated to the Paleolithic ‘Old Stone Age’. An era which spans anything from three-million years ago to 10,000 BC.

The Sassi di Matera (Sassi is simply Italian for ‘rocks’) is an area filled with ancient cave dwellings, dug into the steep, soft walls of the ravine carved by the Gravina river.

The Romans founded the town on the plateau above the Sassi, although subsequently, its history is filled with sieges and conquests. Peoples as diverse as the Greeks, Germanic tribes such as the Goths and Lombards (Longobards), Byzantines, Saracens, Italo-Normans, Spanish Aragonese, French Bourbons, and Italian noble families such as the Orsini have all settled and ruled in Matera.

Between 700 and 800 AD, small Benedictine and Basilian religious communities fleeing persecution from Cappadocia, Armenia, Asia Minor and Syria also took over some of the caverns. They created over 150 rupestrian (cave or rock painted) churches. Some are truly magnificent, with pillars and chambers carved out of the rock, and decorated with fabulous frescoes painted by the monks.

In twenty-first century Matera, residents still live in the same caves occupied by their ancestors for the past nine thousand years.

The seat belt bit into my collarbone as Mark swerved through the stone gates of the natural and archaeological park, Parco Murgia. He threw the truck uphill on sinuous hairpins that clung to the hillsides with the same ferocity as the khaki scrub of grass and woody herbs that poked out of fissures in the limestone. Our campsite was on the opposite side of the Gravina canyon to Matera. As we rose, each turn extended our views over the parrot-green sea of wheat on the plain below, and revealed cave dwellings in the rocks right by the roadside.

When we reached the summit of the plateau, a couple quickly clambered on to the verge and stared in disbelief as The Beast swung away from the narrow road through another pair of stone gateposts. We hoped the rough, ivory-coloured track we joined led to our campground.

Camping Masseria Radogna is in the grounds of a 19th-century walled farmhouse, amid almond and olive trees, with the Neolithic village of Murgia Timone just outside its rear gate. In keeping with many of our park ups, we were next to tombs, although these were by far the oldest. They dated back 8,000 years; twice the age of the disc barrow we camped beside on Shooting Box Hill in the UK.

The manager and his assistant gave us a welcome like no other. Since we’d just arrived, Matera hadn’t yet worked its magic and seeped into our bones, but Paolo and Maria oozed a passion for the area that lit up their whole being. Maria was a qualified park guide. She annotated a map and pointed out the historical and natural gems we had in store. As she handed it over, she said,

“If you need to know anything else, let me know.”

Besides exploring the wonders of Matera, we were on a mission to prepare The Fab Four for Albania, so we asked,

“Where can we find a vet? The pups need rabies jabs, protection against leishmania, and Albanian Animal Health Certificates (AHCs).”

“I will ask my boss, Paolo,” she promised.

Ten minutes later, Paolo knocked on the truck and made an announcement that touched our hearts,

“I have booked the vet for you. He doesn’t speak English, so I explained to him everything you want. I will take you there because the streets are narrow, and your truck won’t fit.”

Talk about the Aloha Spirit!

Our introductions weren’t quite over until we’d met Nina, a shaggy white shepherd dog who patrolled the campsite. Maria told us Nina, who had the stature of a super-sized golden retriever, had trooped in one day with her litter of pups and never left.

“She carried every single one here in her mouth!” she said, proud that this new mother had chosen Masseria Rasdogna as a haven for her babies.

Mark and I are wary of shepherd dogs. They are invariably huge, and have well-developed guarding instincts. When it comes to protecting their turf and everything on it, they are as proactive as the most notorious Mafia Don. They are also equally as comfortable in the deployment of excessive force to press home their point. Earlier, Maria had warned us,

“Speak to me about where to go in the park. There are herds of sheep and cows with shepherd dogs.”

As for Nina, she explained, “Nina is the queen! She rules the campsite. We must let her sniff your dogs, then she will be okay.”

The Fab Four met Nina, and Maria’s dog, Virgola, one of Nina’s daughters.

Maria shared her final tip to help us make the most of our time in Matera.

“You must walk to the Belvedere at around 8.30 p.m. and watch the sunset over Matera. It is beautiful.”

We did, and it was such a spectacular sight that, for the duration of our stay, an evening trip to the Belvedere became an almost daily ritual.

The footpath from the campsite followed the edge of the ravine. The ground was stony and held very little soil, so, as we walked, dry vegetation crunched under our feet. Wild thyme suffused the coolness of dusk with its intoxicating aroma. We stared down on to the glossy backs of red kites, who soared through the Gravina canyon. Everywhere we looked, lesser kestrels, the park’s symbol, rose and hovered.

Matera was originally built to be hidden. Our initial view of the Sassi, a vast honeycomb of cave dwellings in the steep canyon walls, took our breath away. Above, a higgledy-piggledy jumble of medieval buildings sprawled across the piano (plateau). The spire of the thirteenth-century cathedral crowned the skyline like a space rocket ready for launch.

Built from the same tufa rock as its surroundings, Matera looked as though it had sprouted the landscape. It’s haunting beauty has not been lost on location scouts. Matera has been the backdrop for many films, most recently playing host to James Bond in No Time to Die. The Belvedere is the location of Christ’s crucifixion in Mel Gibson’s The Passion of The Christ.

As the sun set, we watched the grey, pale gold, and pinky-dun buildings fade into shadow. In days gone by, residents used to light fires and candles to reflect the stars. One by one, as electric lights flashed into life, they still twinkled and reflected the past.

When we got back from the Belvedere, we found a bunch of wild asparagus foraged by our neighbour, Domenico, on our step.

For comprehensive information on taking dogs to Albania, check out Travel With Dogs to Albania – What You Need To Know. 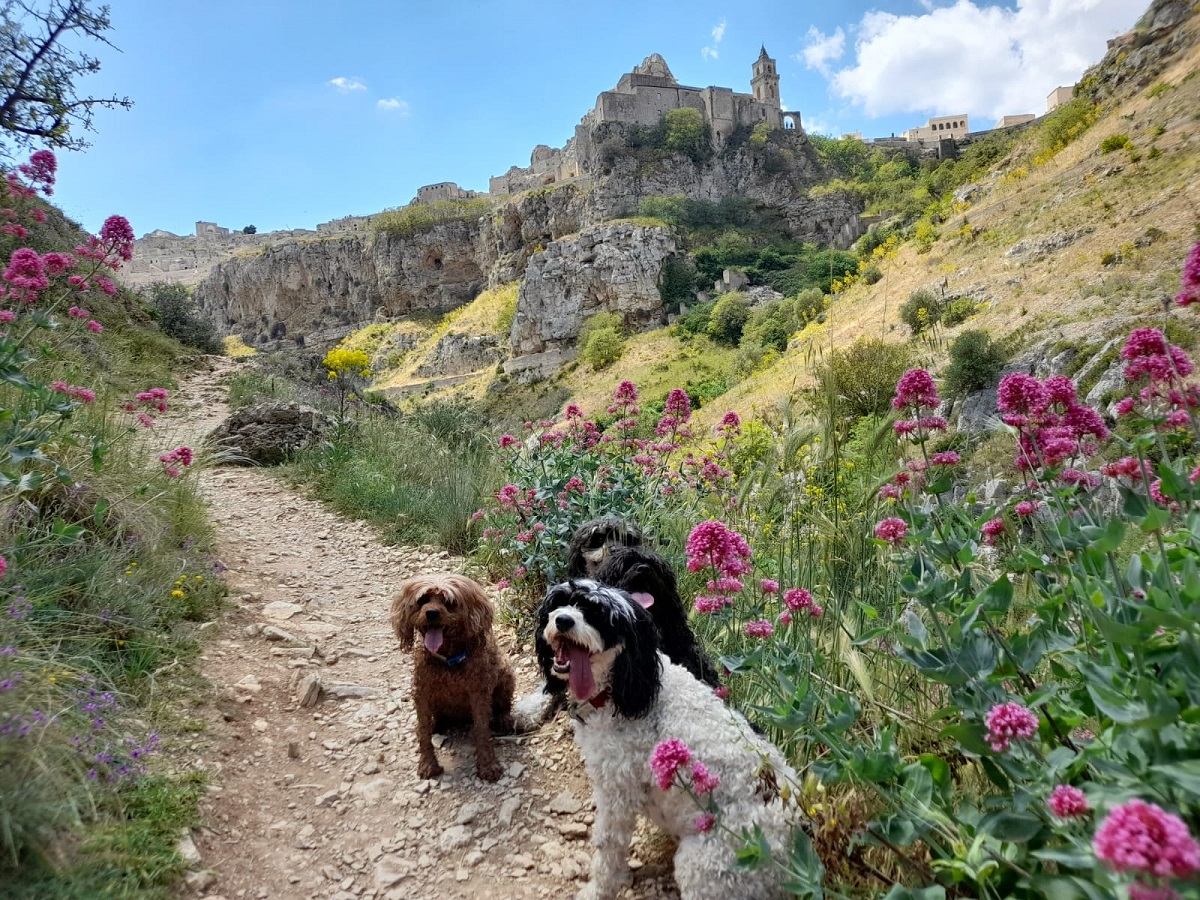 Get Pupdates & Trip Tips Straight Into Your Inbox!

Dogs ‘n’ Dracula, the third book in my Adventure Caravanning with Dogs series recently won a Chill With A Book Premier Readers’ Award!

Find all of my books here: